Do you remember the game MASH? Yes, I’m talking about THAT MASH- Mansion, Apartment, Shack, House. When I was a kid, I thought this game would single-handedly determine the type of adulthood I would have. From where I would live to how many kids I would have and what kind of car I would drive. As a kid, this game allowed me to dream without even really realizing I was doing so- and I know I’m not alone. We all had these expectations growing up- things we wanted to do and things we could do! No dream was too big, and no goal was out of reach. But at some point, many people, maybe you included, realized dreaming wasn’t enough and became doers.

What’s the difference between a dreamer and a doer? Dreamers talk, and doers do.

Dreamers can take you to another world with their stories. They can paint this world vividly and make you feel like you’re actually in the dream with them! Doers? Well, they turn this world into their reality. When I think about a good example of a dreamer turned doer, Jeff Bezos is someone who immediately comes to mind.

Bezos was raised in Houston, Texas, home of the Lyndon B. Johnson Space Center and the place where Neil Armstrong and his crew left Earth for the Moon in 1969. As a kid, he was inspired by watching the Apollo 11 moon landing and became obsessed with Star Trek and space aviation. Later, his family moved to Miami, Florida, where he graduated valedictorian from high school in 1982. In his commencement speech, he spoke about his future space ambitions.

Fast forward to 1994, when Bezos founded Amazon in his small home in Seattle, Washington. Amazon wasn’t space, but it was definitely a big deal! His book-selling website opened for business on July 16, 1995. Its homepage greeted users with the proclamation of being “Earth’s Biggest Bookstore.” Bezos’ appetite for innovation seeped through all levels of the company, cemented by his ideology that it was “always Day 1 at Amazon.” He encouraged his employees to take risks, even if that led to spectacular failures.

In the year 2000, Jeff Bezos resurfaced his dream for space travel and founded his space project, Blue Origin. To fund Blue Origin, he sold $1 Billion of his Amazon Stock each year since 2017 which currently amounts to $5.5 Billion. On July 20, 2021, just after 9:00 AM ET, he accomplished his goal to travel to space. Blue Origin successfully completed its first human spaceflight with four private citizens. One of those citizens was Jeff Bezos, an astronaut and a dreamer turned doer. Talk, about, full circle!

Bezos was putting out his big space ambition into the world as he graduated from high school.

That’s the difference between dreamers and doers- dreamers are known for just talking about their future goals and aspirations.They think about it, say it out loud then allow roadblocks and distractions to stop them from fulfilling. On the other hand, doers start fulfilling their dreams even when it’s not obvious they’re doing so. They lay the groundwork and plant the necessary seeds to turn their dreams into a reality.

A dreamer will speculate and contemplate all the pros and cons of their goals- so much so that it eventually turns into inaction. A doer will experiment and innovate. Doers are willing to try new and different things to reach their goals. If you’re dreaming about making six or even seven figures and providing a better life for your family, you need to look at the pros and cons of reaching your dream. If you’re a doer, you will be proactive about experimenting and implementing the necessary steps to go get what you want! Trust me, the risk is worth the reward.

At the end of the day, if you’re a dreamer, you have to start thinking differently. Dreamers listen to fear- doers work through fear. You and I both know, humans are only born with two fears in life- the fear of falling and the fear of loud noises; everything else is False Evidence Appearing Real. Learn to work through fear and tune it out. If not, you will kill your dreams right away because of it.

Lastly, dreamers compare their life to others, and doers construct their life. You need to stay on top of innovation, or your brand will be lost in the noise. Don’t let others rob you of your dreams, and don’t rob yourself of your ability to achieve them. Figure out better ways to do your business for the future.

You can dream, sure. But you also need to DO. You can live your life by design- but it starts with a dream and ends with YOU doing everything you can to fulfill them. 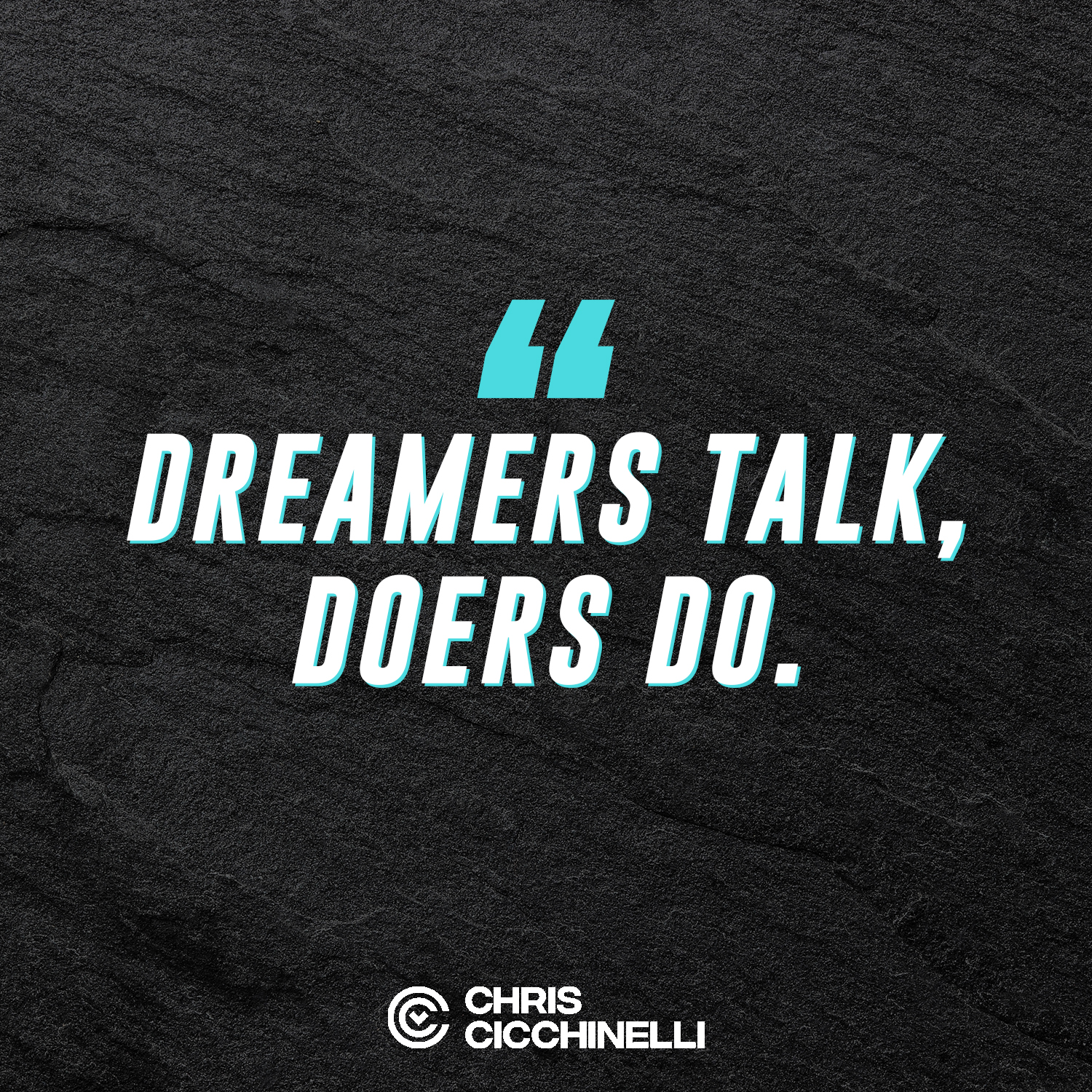 I am so motivated.. I am recovered from Covid. I will never be the same… Life is to short to sit still!